As featured in Energy Voice, Anderson Anderson & Brown Corporate Finance (“AABcf”) are delighted to share our quarterly Deals+ update for Q3 2019, highlighting selected Oil & Gas M&A and Fundraising transactions across the UK. Reflecting on Q2 2019 From…

From a North Sea perspective, Oil & Gas deal-flow in Q3 2019 has slowed with less Private Equity (PE) backed transactions in comparison to previous quarters and the Majors continuing to take a disciplined approach to capital and operating expenditure. Despite this, there are significant opportunities available due to the continued divestment of non-core activities where the focus continues to be on maximising economic-recovery from a mature Basin. Whilst it is perhaps optimistic to suggest a renaissance in the North Sea there is evidence of a rejuvenation, albeit sanctioned exploration projects and new discoveries are still far behind pre-2014 levels. This is largely the result of a supply-glutin the industry with significant over-capacity amongst oilfield service providers resulting in lower vessel utilisation rates and a renewed focus on offshore renewables projects,
particularly from a subsea perspective.

M&A activity in Q3 2019 has continued to feature the disposal of non-core activities amongst oilfield service providers with notable transactions including Proserv’s disposal of subsea communications business Nautronix and the disposal of their field technology business to Imenco and Acteon respectively. Elsewhere in the market, Ashtead Technology, backed by Buckthorn Partners, acquired Aberdeen-based Underwater Cutting Solutions, a deal that will further expand their IMR and decommissioning capabilities. From an E&P perspective, notable transactions included Energean’s acquisition of Edison for c.£667m and Perenco’s acquisition of the remaining 51% stake in Petrofac’s Mexican operations for c.£221m. 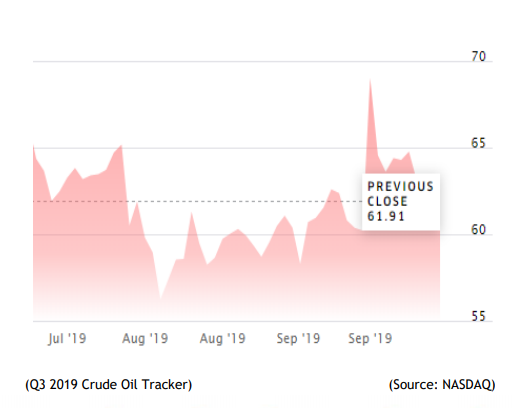