What are the opportunities for energy investments overseas, and can they compete with U.S. onshore?

Private markets, particularly in private equity (PE) investments, are growing globally. Following the 2014 to 2016 oil and gas industry downturn, we now have returned to a more stabilised market—and this time with more advanced technology than ever before. The U.S. PE market leads the world both in terms of size and growth, deploying billions of dollars in 2017 and 2018 to increase domestic shale production and improve takeaway capacity for delivery to the U.S. Gulf Coast’s refineries and export facilities. This is contributing to the rejuvenation of U.S. onshore production, so much so that the U.S. is now the world’s leading crude oil producer. The volume of proven reserves and resulting drilling activity are expected to continue increasing under a stabilised price environment, but at what point do the number of PE teams and commitment dollars exceed the availability of domestic economic assets? What about PE investments in E&P abroad? We have seen some significant investments made in experienced British teams in the U.K. North Sea.

The rise of U.S. domestic shale

Simultaneously with the oil and gas downturn, significant advances in completions technology opened up huge new opportunities in the unconventional oil and gas market; however, prices were still too low to make many basins economically viable. This has all changed now, however. With a stable, and relatively high, oil price and commercially viable completions technology, money has flooded into unconventionals, most notably in the U.S. onshore, and especially, the Permian Basin. As of April 2018, 22% of all drilling rigs in the world were concentrated in the Permian. 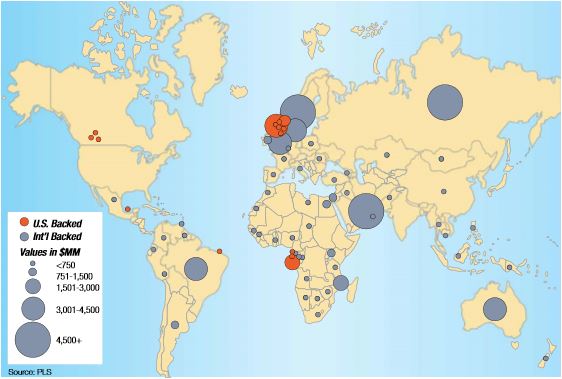 The bulk of U.S.-backed international private-equity investments have been focused on the North Sea. 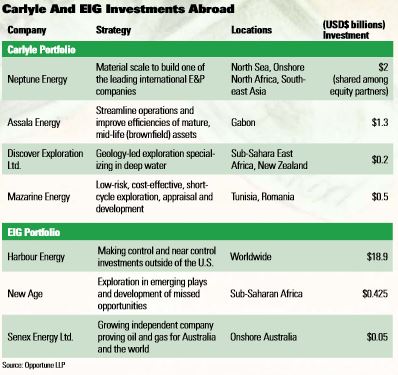 With this, we are starting to see a new trend of U.S.-led oil and gas investment realignment activity. In 2018, operators such as ConocoPhillips Co. and Chevron Corp. have begun divesting their positions in the U.K. North Sea in order to turn their attention to U.S. opportunities in West Texas unconventionals. Alaska has also seen more interest from within the U.S., which is deemed by some to retain plenty of opportunity and reserves, with low extraction costs.

Has the economic viability of U.S. onshore development put the brakes on new U.S. PE investment into international opportunities?

When talking about interest in international opportunities, almost every U.S.-based PE firm believes the qualitative barriers to entry make overseas investments a nonstarter. At current commodity prices, there simply isn’t enough present value to overcome the myriad of political risks, foreign currency fluctuations, economic uncertainties and lack of infrastructure associated with most of the international oil field.

At the same time, those who already have U.K. investments in their portfolio said:

Outside of the oil and gas majors, development in the Middle East and Asia are largely controlled by nationally owned oil companies. The risk of countries nationalising oil and gas assets developed within their respective borders and national waters is a fear across offshore Africa and has been a reality in Central and South America.

Given the geographic risks highlighted, it shouldn’t be surprising that the bulk of U.S.-backed investments have been focused on the North Sea. There are several examples of differing strategy when it comes to where U.S. money is being invested, either domestically or internationally.

From 2014, there began a wave of U.S. PE investments into the U.K. North Sea with the likes of Blackstone pairing up with U.K.-based firm Blue Water Energy LLP to invest in Siccar Point Energy Ltd.; EIG Partners and Natural Gas Partners backing Chrysaor; CVC Capital Partners investing in Neptune Energy; and several other smaller-scale examples. These investments have provided U.S. PE access to international opportunities all through highly experienced local teams with decades already invested in the North Sea Basin.

The trend behind these investments has been to capitalise on opportunities created by the oil and gas downturn where organisations such as Shell, OMV and Engie have either divested or pulled out of the North Sea Basin completely to satisfy their own portfolio objectives. Assets that have become available as a result of this can be strategically attractive in the hands of smaller companies with highly experienced local leadership operating much leaner business models. The North Sea and, indeed, other international basins still present highly attractive E&P investment opportunities—and we expect this trend to continue.

PE investments overseas are going to require large dollars in mature fields or otherwise opportunistically low-risk plays with established infrastructure. Today, two Washington D.C.based global PE powers, the Carlyle Group and EIG Global, are leading the charge in international E&P investments. Carlyle’s Neptune Energy and EIG’s Harbour Energy, through its investment in Chrysaor, were responsible for two of the largest international transactions in 2017.

Through 2017, Carlyle has varied its investments geographically and strategically across several upstream companies, and EIG Global has been primarily focused on Chrysaor in the North Sea through its ownership of Harbour Energy. However, EIG has recently begun diversifying its international investments by successfully winning an estimated US$1-billion cash-and-debt bid for two mature, shallow-water fields o the coast of Rio de Janeiro. EIG also closed the acquisition of Prumo Logistica, the operator of Brazil’s Port of Acu, for approximately US$166 million in March 2018.

While EIG and Carlyle are investing heavily overseas, they aren’t going it alone. Both firms are co-investors in their largest investments, with EIG’s Harbour co-investing in Chrysaor alongside Barclays Natural Resources and NGP Energy Capital and Carlyle co-investing in Neptune with CVC Capital Partners and China Investment Corp.

Sharing economic risks through co-investment internationally is likely a necessity for large transaction amounts or certain exploratory projects, but we’re also seeing risk-sharing domestically as upstream and midstream companies are funding the expansion of takeaway capacity in the Permian and Denver-Julesburg basins. Companies are forming joint ventures to participate in the construction of pipelines, processing facilities and even the marketing of production downstream.

Ultimately, closer collaboration with partners across the full value chain of oil and gas activities may be the key to unlocking significant value for PE in any environment, and particularly overseas. Baker Hughes, a GE company, is one example.

Baker Hughes recently partnered with Chrysaor for a North Sea drilling campaign. As part of the deal, the two companies aligned incentives associated with both the operations and reservoir outcomes. Baker Hughes also took on a portion of the capex to contribute to the cost of the work program in exchange for higher potential returns should the project meet certain operational and geologic targets and success criteria.

The importance of U.S PE abroad

North America leads the global PE market with a 59% share in 2016 and 2017 with year-on-year growth at 18.6%—more than twice in percentage terms that of Asia and almost nine fold over Europe.

Moreover, the U.S. market is more advanced and accustomed to PE—U.S. investors are more in tune with the oil and gas market than any other nation globally.

With this platform to operate from, U.S. PE investment has an unrivalled position to capitalise on the global E&P market, while spreading risk and reward away from single-basin strategies. U.S. PE has never been in a more powerful position in the global oil and gas market.

Alasdair Green is a director and head of E&P strategy for AAB. Callum Gray is a director within AAB’s corporate finance team. Josh Sherman is the partner in charge of complex financial reporting for Opportune LLP.