After delivering change, transformation, business and process improvement projects for over thirty years, it is difficult not to accept that one of the most important elements in change project success is effective and proactive sponsorship. In fact, without effective and... Read more 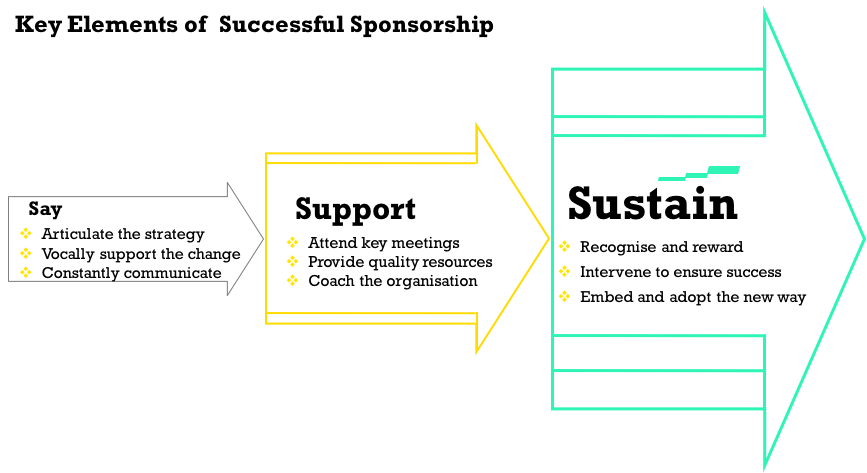 Delivery of the change project is a strategic element of the Portfolio and is directly related to delivering the organisation’s strategy. The Change Sponsor should be identified right from the start. To ensure change success, it is usually the Programme, Project or Business Improvement Lead who has to have the initial conversation with the Sponsor. Sometimes this is a difficult conversation. A Sponsor is usually a trusted senior executive with many years of experience and with widely accepted organisational creditability. However, a large number of change and transformation projects fail to deliver the benefits originally stated or promised. In some cases, this can be due to the Sponsor performing a project oversight role, where this should be the responsibility of the governance or steering committee. There are three key elements that make for successful sponsorship: ‘Say’, ‘Support’ and ‘Sustain’.

Say: Sponsorship starts with providing vocal support for the change. The ‘Say’ is the foundation and is all about communicating the business case for the change to all affected stakeholders. Communication is key to change success and an extremely important first step:

Support: Having built the foundation of communication, ‘Support’ builds on the ‘Say’, and it is in this element that the Sponsor starts to actively and overtly support the change:

“Each person holds so much power within themselves that needs to be let out. Sometimes they just need a little nudge, a little direction, a little support, a little coaching, and the greatest things can happen” ~ Pete Carroll

Sustain: ‘Support’ is much more important than ‘Say’, but ‘Sustain’ is critical for the organisation to deliver value and achieve the strategic goals. This is without doubt the biggest challenge in any change journey, gaining employee adoption of the new way of working and the new desired behaviours. ‘Sustain’ proactively builds on the foundation work from ‘Say’ and ‘Support’ and this is where the Sponsor’s efforts will deliver sustainable change. For the change to be a sustainable success the Sponsor has three critical tasks:

“Without effective and proactive sponsorship the change project will eventually fail, the change will not be adopted by the employees nor be sustained, and it will not deliver the intended benefits” ~ Peter F Gallagher